Decompression With A Fluffy

Sometimes you need a little fluffy to make everything all right.

Not one of these     flickr creative commons via douglas furth

I’ve mentioned Emma and Tanner the Corgis in a few previous posts. I write with them and they are both trained as Therapy Dogs.

Today, Emma and Tanner joined with nearly a dozen other Therapy Dogs in a gathering at the campus of the University of California at Davis for a Therapy Fluffies Event, sponsored by the Student Health  and Counseling Services Organization on campus.

It was finals week at U.C. Davis and I don’t know about you, but back in the day, (yes – way, way back for me, thank you) finals or mid-terms were nausea inducing panic sessions. Nights of caffeine fueled study sessions meant when the test paper hit your desk, it started to absorb all the flop sweat and shame you collected that semester. Fun memories, yes?

The University started the Therapy Fluffies program four years ago as a means of blowing off stress and decompressing after finals. This year, social media on campus lit up prior to the event and 1,700 students said they would drop by.

I don’t have a final count, but the turn out was far higher than projected.   The local television news had cameras at the event and Tanner posed for dozens of selfies with students.

Tanner is NOT camera shy 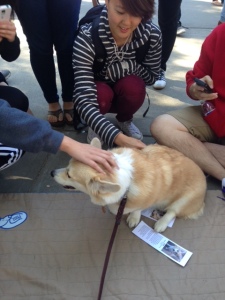 Emma really got into all the attention

As you can tell, Tanner really got into the spirit of decompression.

I heard students say that they missed their dogs back home, how spending time petting a corgi made all the test stress disappear and as soon as they saw the dogs, a few claimed they began to relax. No one even cared that some old guy was on the other end of the leash, all attention was on the dogs, as it should be.

Here’s is a quick clip from the Sacramento Fox News feed:

I wish I had seen a Therapy Dog after a few of my finals. It would have made a stressful day much more tolerable.

← What Color Is Your Asshat?
Wanna Go To Mars? →
Follow James L'Etoile on WordPress.com