After The Dust Settles – Burning Man

Several thousand years from now, alien archeologists will examine the burnt strata of our planet and conclude we were a shallow species, bent on self destruction. They will judge us on our mummified remains, adorned with metal piercings, body art and bong resin.

After careful analysis, the archeologists will sanitize and quarantine the planet to prevent the spread of the cosmic spores that hastened our demise. It won’t be climate change, mutant anthrax, or a nuclear apocalypse that caused our extinction. We will be written off to extreme weirdness. The archeologists had no way of knowing they landed at Burning Man. 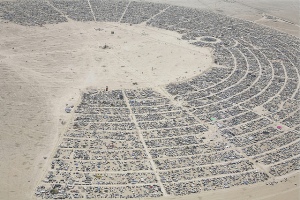 What will the aliens think?
image by matt via flickr creative commons

Let me just get it out of the way. I have never attended the Burning Man gathering in the Northern Desert. I have, however seen and suffered the aftermath…

Those of you who are not familiar with the standard by which we shall be judged, Burning Man is an annual gathering in a remote, barren swath of desert. Participants create a temporary city dedicated to art, self reliance and self expression. Think Woodstock with Hipsters and without the music. Now I know some of you might get a bit defensive about the Hipster label, but “Burners” tend to play up the “I’ve been Burning since before it was cool, angle.” You know who I’m talking about.

Since I don’t follow the annual pilgrimage to the temporary city on the Playa (Burner term for dust filled dry lake bed), I didn’t know their annual exodus from the festival leaves a Charlie Brown character dust trail through Reno, Nevada. I found myself in the midst of Burners while checking into my hotel. The hotel had mandatory stations set up outside and required guests coming in from the Playa to hose off their luggage (and themselves) with compressed air before entering the facilities. It looked like a radiation decontamination set up after Fukushima.

I learned that one’s personal hygiene is not among a Burner’s priorities. Perhaps this is the self expression they hype so much. Now, if you or I were camping in the dirt for a week, what would be one of the very first things you do? Apparently, taking a shower, changing clothes, or even applying a hint of deodorant would diminish the experience. So, they collapse at the casino bars, suck up a few Pabst Blue Ribbons and commune with their fellow Burner Refugees in a cloud of smoke (purely medicinal, I’m sure). 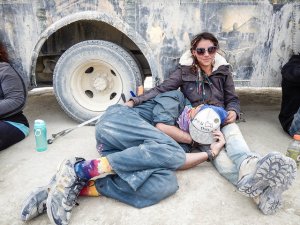 Some migrated like a herd of wildebeest, very dirty wildebeest, to the hotel pool. I overheard someone describe the pool water turning from crystal clear, to gray brown…

The future alien archeologists will uncover that clothing, in our time, was somewhere between nonexistent and just plain odd. Top hats, no pants, or combat boots, fishnets and a tutu with lights. WTF… The whole, “We welcome anyone to the Burner culture,” is not exactly accurate either. A small gathering of the smelly folk on the elevator pointed out I wasn’t a Burner–and they laughed.  What about this face doesn’t say fun-loving Burning Man?

If you’re into people watching, there was plenty to watch. 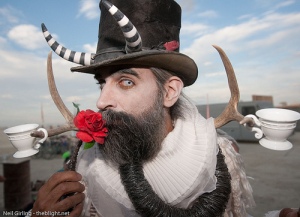 So, centuries from now, when the dust settles over the Playa, our species may be judged by the smoldering remains of a Burning Man in the Northern Nevada desert. Well, it could be worse, I suppose. The archeologists could have stumbled onto the remains of a Congressional session–Burners look pretty good in comparison. 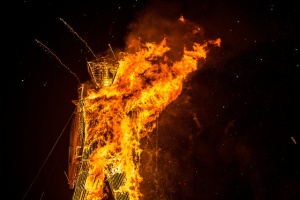 Burn On!
image by duncan rawlinson via flickr creative commons