Have They Lost Their Minds?

I usually don’t get off on a political rant, and I’m not sure this is really political, or if I’m just sensitive to stupid.

No, this has nothing to do with North Korea, missing deleted e-mails, a Russian conspiracy, or where Puxataney Phil spends his time when he’s not forecasting the weather. This episode of WTF Theatre is brought to you by the fine folks in our University of California educational system.

For you non-California folks, our public education system, at the college level, is broken down into three parts; the community college (the two year institution where you earn an Associate of Arts Degree, and transfer to a four year school, if that’s your path), the California State University system (23 CSU campuses are located all over the state, from Humboldt, to Northridge, to Bakersfield and Sacramento), and the University of California system, with 10 UC campuses in more “prestigious” schools, like UC Berkeley, UC Davis and UC Irvine.

The UC system claims to exist as a world class educational system and a bit more prestige goes with the diploma earned from one of these institutions, as opposed to my humble California State University school. (Go Hornets!) The UC claims to be the “Gold Standard” in state education. I know that annual in-state tuition (not including room & Board, or books) to UC is over $13,000 and non-resident is over $40,000. Most students leave with crushing student debt to go along with that shiny new Liberal Arts diploma.

A state audit of the UC system this spring revealed some creative budgeting which uncovered over $175 million in reserve funds hidden away while the UC pushed for a tuition hike. The same audit mentioned the UC was limiting the number of resident admissions, in favor of the more lucrative non-resident tuition paying admissions.

The Chancellor of UC Berkeley stepped down from his post this week and will be on leave (not retired, just on leave) for the next year, earning $434,000–for doing nothing while he “prepares” to teach again next year. 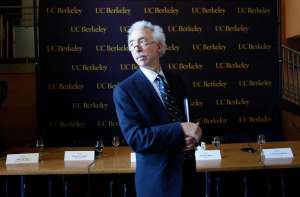 The Chancellor of UC Davis was embroiled in ethics and mismanagement allegations for the past couple of years. Her role in authorizing the pepper spraying of protestors on campus, possible conflict of interest in a textbook company were national news for a while. No matter how you come down on the allegations, she was eventually forced out of office and returned to her previous role as a tenured professor. But here is the rub, she was awarded a 9 month contract and will teach a single class. She will earn $318,000 for this single class. That must be some class, right?

There comes a point where the ivory tower types become so removed from reality that they actually believe they are worth this kind of salary. The grumpy old man in me begs to differ. You aren’t, no one is worth that kind of renumeration for a teaching job. When taxpaying families struggle and scrimp and save to send little Johnny off to college, this careless expenditure of tax dollars is offensive. I don’t mind tax dollars going to support higher education, I do mind when the UC Chancellors act like Scrooge McDuck.

Yet, they argue they need to keep the salaries high to attract the best candidates…

I guess that’s where the “Gold Standard” label came from.