Determining what drives people to kill has captured the minds and imagination of sociologists, criminal justice professionals and scholars since Cain took the jaw bone of an ass to his brother.

Murder, the of taking an innocent life, is the most extreme act known to human kind. What drives someone to that irrevocable decision? Greed, jealousy, love, revenge, and keeping a secret, are among the most often cited motives for murder. We know that mental illness plays a role in some of the serial killers we’ve seen in the Sacramento area. Richard Trenton Chase, the Vampire of Sacramento had a history of mental illness and was released from treatment only to unleash a bizarre and brutal serial of killings. Financial gain was the motive when Dorothea Puente poisoned as many as nine of her renters in her F St. Boarding house, burying them in the back yard, to cash their government benefit checks.

What about the killer who doesn’t seem to fall into the usual motives? Eric Royce Leonard didn’t kill for money, revenge, or love–he was said to have killed for the thrill of it. He’s known as the Sacramento Thrill Killer.

On the evening of February 12, 1991, Sallie Jane Thomas drove her fiancé, Stephen Anderson, to his new job as a clerk at a Quik Stop market on Auburn Boulevard. Miss Thomas would later recall a young White man wearing a black trench coat, black slacks, and black shoes, near the store.

A short time later, Lester Morris arrived at Quik Stop and found a man lying on the pavement in the parking lot, near the front door of the store. The man was bloody, but Morris recognized the gunshot victim was still alive, and ran into the store seeking help.  He found Stephen Anderson, and another store employee, Zeid Obeid on the floor. Both men had been shot twice in the head at close range. Morris, who was deaf and had impaired speech, tried to call 911 from a pay phone but he could not make himself understood. A pickup truck pulled into the parking lot soon after, and the driver made another call to 911.

Five .25 caliber shell casings were found in the store. A small amount of money, and not all the cash in the register was taken and an open container of beef jerky was found outside the market.

One week later, on February 19, 1991, an employee of the Round Table Pizza store, in the Country Club shopping center in Sacramento, became concerned when her calls to the restaurant went unanswered. She went to the location and found the front door unlocked, well after what should have been closing time. In the back room of the establishment, she found all three employees, Sarah Crook, Kyle Reynolds, and Andrea Coladangelo with gunshot wounds to the head. Eight .25 caliber shell casings were discarded at the location.

Two of three cash registers were emptied. A customer told officers he’d seen a man in a black coat, black pants and black hassled loafers inside the Round Table Pizza just prior to the murders.

Sacramento Sheriff’s deputies and investigators interviewed over one hundred individuals in the areas around both crime scenes. Three months after the murders, they were running out of leads. However, one deputy interviewed a man who had been seen at both crime scenes after the investigations had begun. He claimed he lived in the area. His name was Eric Royce Leonard. Even though Leonard didn’t have an alibi for either of the crimes, the deputy didn’t consider him a likely subject because Leonard was quiet, timid, and confused as a result of a mental impairment. The deputy did take a photograph of Leonard.

In June 1991, a detective found the interview notes and the photo of Leonard. He took the photo to a gun store near the crime scenes and the manager said he’d seen the man in the store. The detective showed the photo to Sallie Thomas, who dropped her fiancé at the Quick Stop that night in February. She recognized Leonard as the man she’d seen that evening.

Detectives interviewed Leonard and he eventually admitted purchasing bullets for his father’s gun at the local gun shop and those bullets were the same kind used in the murders. Leonard was escorted home where officers took possession of a black trench coat and black tasseled loafers. At the same time, officers went to Leonard’s father’s home and took possession of a .25 caliber pistol. It quickly revealed that it was the firearm used in the murders.

On October 20, 1995, after a hard fought jury trial, full of evidence that Leonard was developmentally disabled, with an IQ of 80, with a history of epilepsy, he was found guilty of six counts of First Degree Murder, two counts of Robbery, and sentenced to Death.

There was never any admission by Leonard that the killings were carried out as a thrill, or on impulse. The Thrill Killer name was given him by the media covering the crimes, as they could see no other rationale for such a violent, brutal act. After his sentencing, he was hospitalized after hearing voices commanding him to scald himself with hot water. 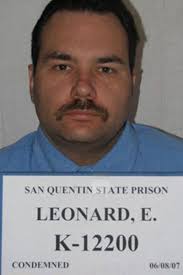 ← The Vampire of Sacramento — Richard Trenton Chase
So You Married a Murderer →
Follow James L'Etoile on WordPress.com