I took this oath a few times in my career. It’s a responsibility not be to taken lightly. Yet California’s newly minted Governor seems to interpret the oath of office a bit differently. His swearing in must have included some “fine print” that included a provision that he’d only support laws that fit into his neat little bubble — laws like the death penalty. 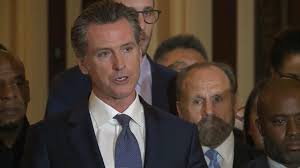 Now, I know that opinions on capital punishment swung pro and con over the years. I’m old enough to remember 1972 when death sentences were overturned and commuted for over one hundred murderers including; Sirhan Sirhan, and Charles Manson. The following year the California voters passed an initiative, Proposition 17, amending the California Constitution reinstating capital punishment for specific crimes.

The back and forth struggle continued until 1976 when the California Supreme Court again declared the death penalty unconstitutional because it didn’t allow the defendant to present mitigating factors relating to the murder. In 1978, the voters passed Proposition 7 reinstating the death penalty, adding Life Without Parole as an option, and other procedural safeguards including an automatic appeal to the California Supreme Court.

In spite of the reinstatement, in 1986 California Supreme Court Chief Justice, Rose Bird reviewed Sixty-four death penalty cases and reversed them all in spite of the sentencing court’s findings based on the evidence presented at trial.  In a stunning special election, Bird was thrown out of office as the voters (67%) believed she substituted her personal views and opinions for the laws and precedents upon which judicial decisions are supposed to be made. Something that our new Governor seems to be doing.

Most recently in 2016, California voters were given the opportunity to vote on two competing initiatives about capital punishment. Proposition 62 which, would have abolished the death penalty, was rejected. The other initiative, Proposition 66, streamlined the capital appeal process. The measure passed.  Its constitutionality was upheld 5-2 by the state supreme court on August 24, 2017, though the court ordered that Prop 66 take effect.

Yet one man inserts his will over that of the voters…

The media went for his publicity stunt and blasted photos of Correctional Officers dismantling the execution chamber at San Quentin.  Why not simply lock the doors? Instead parade a couple of uniformed officers carrying equipment out to a flatbed truck. Interesting also, because Officers don’t usually perform the work of mechanics and engineers under union contract.. 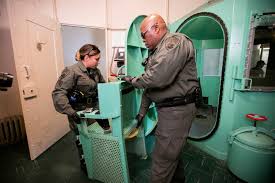 Now before you get all twisted up…I do think there are some things we can–should do–to the process. There is room for reform, but my personal opinion is that the attention needs to be directed at the local level–at the District Attorneys who charge these crimes.

I’m sorry but not every murder deserves the death penalty. It should be reserved for the most vile, most egregious crimes. Multiple murders, murder of a peace officer, murder in the commission of a kidnapping–you get the idea. Yet many of the men (and women) sitting on death row are not that different from criminals sitting in another prison serving 25-to-life.

Persons of color seem to appear in death rows at levels higher than one would think reasonable. That is not a death penalty issue. It’s a fundamental justice issue. District Attorneys should be held accountable to charge all criminals in consistent fashion. They are the elected officials who must ensure that bias isn’t a factor when it comes to all charging and sentencing decisions–from who gets probation to who is charged with the special circumstances that predicate the death penalty.

Some death penalty opponents point to wrongly convicted inmates facing the death penalty. Cases are appealed, and new evidence, including DNA is submitted exonerating the convicted – 20 nationally since 1992. No one has come forward with evidence to show that a California inmate was wrongly executed.  Again the charging and prosecutorial decisions and the cases presented to warrant the death penalty must be a very high bar.

If the Governor chooses, me may individually commute the death sentence based on facts–not emotion. The families of the victims deserve better. If the people want the law to amend or eliminate the death penalty, then put it on the ballot. Because that’s what democracy does.

Death do us part–unless you’re in California.