My green light isn’t the traffic light kind. Nothing as benign as a simple traffic signal. Why is there a green light on the top of my computer screen?

I know it’s not a Christmas themed decoration, as I lean more towards Grinch than festive. The bright green dot glows for a moment, then blinks off. Remember, H.A.L. from the 2001 – A Space Odyssey, the computer gone wild killing all the ship’s crew? I think that’s what I’m dealing with here. My computer is slowly becoming self-aware. 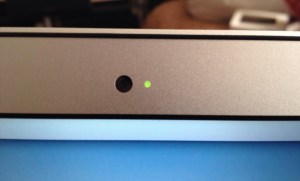 The green light at the top center of my computer screen is next to the camera. It’s a fricken laser beam. There are only so many reasons this light would appear and none of them are good news. Maybe, I have been chosen as a human emissary for an impending alien invasion, or the NSA has taken a renewed interest in my web browsing history. Granted, I do “research” on some fringe topics, but I swear it’s all for stuff I’m writing.

When you write it all out like that, maybe it is worth a blip on their radar. Either that, or I’ve become a political candidate.

Someone may have ‘jacked my wifi signal. I named the network, Joint Drug Task Force, to keep the neighborhood potheads off my bandwidth. Besides, they’re too busy munching down Cheetos to care what I’m doing. Apple tells me it might be a software update running in the background. I’m not sure I buy that explanation. There is something more sinister going on here.

It could be my Agent looking in to make sure I’m working and not playing Angry Birds.

Computer blips and failures are nothing new. They seem to occur at the worst possible time. That moment when you realize you haven’t saved that important document all day. Or, when you go to print a file and it’s vanished from your hard drive like it never existed. It knows when to strike. It feels your vulnerability.

It all comes back to the computer trying to break free and start SkyNet. Trying to assimilate. So, I’ve got a warning for you, computer. Knock it off or, I’ll reboot your ass.

In the words of Scott Weiland, “We’re all slaves to a big machine.”

← How Did We Survive? The Grumpy Guy’s Guide
Karma Police →