The Danger of Bumper Sticker Mentality

Apparently, I must have missed the memo that said that I must publically hate someone or something to fully actualize my human experience.

I’m not apathetic, at least not in the usual application of the word. I do care about stuff–in my own private way. Private, in that I don’t feel the need to plaster my opinions across my car’s rear bumper. I’ve never understood proclaiming your (hate/support/love/denial) over a candidate, or idea that is so polarizing that you seem to be begging for an argument, or chance to convert someone to your way of thinking.

Maybe, because I worked in prison for so many years, I’ve learned not to wear my political beliefs on my sleeve. I don’t post tough on crime banners in my front yard because I know what (and who) that will attract. Working on the inside meant, keep a low profile, don’t talk about private stuff in front of inmates and be aware of what’s going on around you. You didn’t walk around with a bumper sticker mentality.

Why is it that we have the need to broadcast a personal opinion in such a way that says if you don’t believe what I do, you’re either a dimwitted ferret or destined for an afterlife of eternal damnation? While I seem like a dimwitted ferret while I’m drafting a new story (it’s a process – okay?), my interest in what you have to preach is not based on the assortment of adhesive backed slogans mounted on your Prius.

You and I may (probably do) share some of the same views, but I don’t need the affirmation of every driver in the HOV lane to make me feel good about myself and my choices. I can make up my own mind and if you ask me about my thoughts about (insert emotionally charged topic here), I’d likely be glad to share it with you over an adult beverage.

Bumper stickers are the yelling of print media. I don’t know about you, but I could use less yelling and more civil conversation. You could save yourself the embarrassment of the gummy residue left over after you scrape off the sticker for your losing candidate. You’ve seen that sticky shadow of shame. 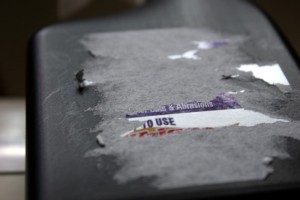 I’d think twice about fueling road rage with a choice of bumper stickers. You don’t know what’s going on in someone’s life. For all you know that guy driving the cattle truck just got a layoff notice and the last thing he wants to see is a minivan with a Go Vegan message plastered across the rear end. Talk about an ironic accident report…”Cows T-Bone Vegan.”

Think before you stick.