Forgive Me Father For I Have Sinned

“Forgive me Father, for I have sinned. It has been ages since my last confession.”

From behind a thin curtain, I swore I heard snoring. The dim light in my confessional made it impossible to see if the Great Confessor was dead asleep, or if there was a rumbling of a small earthquake. 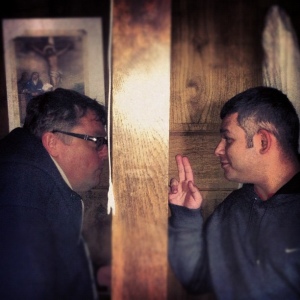 “Father, are you there?”

A deep purr of sleep apnea clear now from the business side of the confessional. My choices were to rattle off my sins while he slept, or roust the man from dreams of angelic holiness. Since my sins were of the mortal variety, and rapped on the side of the confessional with the palm of my hand. The sound was louder than anticipated, I worried that I’d send the aging priest into heart failure.

Father Dominic: “What? Sweet mother of Jesus, is this the end of days? The Rapture?”

Father Dominic: “You again. Fine, get on with it, but I need to be out of here by five. The Sisters of Mercy are holding a bingo party and those nuns can tie one on and get a little wild.”

Father Dominic: “I said. I need to be done by five.”

Father Dominic: “Cut to the chase. What did you do this time? Covet? Blaspheme? Idolatry? I haven’t heard a good Idolatry confession in years. Doesn’t seem to be as pop–.”

Me: “I have sinned. And it’s a big one. I haven’t written a review in months.”

Father Dominic: “You bastard! Ahem–I mean–how is it that you’ve fallen from grace my son?

Father Dominic: “And you read the work of others?”

Me: “Of course–tons of good stuff over the summer.”

Father Dominic: “Then why didn’t you live up to your end of the deal and write a review? It doesn’t take that much effort to toss out a star or two on Amazon for God’s sake.”

Father Dominic: “You need to make amends directly to the persons you have harmed by your actions. That is the next step.”

Father Dominic: “Close enough. We have the same Union Representatives–Higher Power and all that.

Me: “So you can absolve me from my sins. right?”

Father Dominic: “Oh, Hell no. You put yourself in this mess. Get yourself out of it. So,who were these authors you have slighted with your trite self-centered life?”

Me: “You make it sound kinda bad when you put it that way. All right, I’ll take the blame for it all. I read a lot of really good books this summer, and most of them deserve four and five star reviews. Books like:

Father Dominic: “You miserable scum. You’ve let all these authors down.”

Father Dominic: “Is it? How does it feel when your work gets zippo feedback. Like that sound of crickets? Get used to it.”

Father Dominic: “For your penance–.”

Father Dominic: “Interrupt me again boy and I see that you’re scrubbing toilets at the Publisher’s Weekly offices.”

Father Dominic: “For your penance, you shall provide a review of each of the works on Amazon, Goodreads and on your blog. When you’re not doodling on your own work, you need to catch up on these reviews. In the name of Leonard Elmore, Raymond Chandler and the Holy Spirt, amen.

So there is is. My soul cleansed on a contingent basis. Reviews coming in the very near future. May the Great Spirit forgive me… 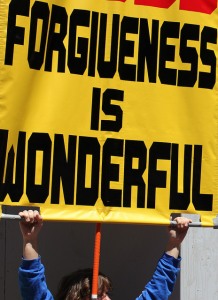