Respect, and I’m not talking about the Aretha Franklin classic, but something just as deadly.

Outside of drug deals, there are more stabbings in prison over respect, or more precisely the lack of respect, than nearly any other motivation. This very unscientific finding is based upon years of “picking up the pieces” after a stabbing or riot on the yard. It almost always came down to the simple issue of respect.

After an incident, let’s say a routine stabbing in an Administrative Segregation exercise yard, you have to find out what happened, and more importantly–the why. We’d interview the inmates on the yard at the time and you’d be surprised that in an enclosed concrete exercise yard, 30 feet square at best, most never saw a thing. That would leave you with the stabber and the stabee–they had to know something about it, since they were, you know, kind of involved.

We’d document the enemy situation in both inmates’ files and avoid housing or programming them together in the future. Then we’d find out about the respect issue. The assailant is the key and not always for the reason you’d think. A PC move, collecting a debt, enforcing a gang decree. Every good cop has sources. An informant, snitch, rat–whatever you want to call them. In prison, you work with inmates on the tier everyday and establish an understanding with them. Not a relationship, not sympathy — an understanding. Both you and the inmates want the cellblock to run without undue interruption from stabbings, disturbances, flooding, throwing burning material off the tier, gassing, or hunger strikes. 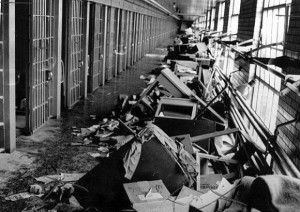 the aftermath image from the democrat chronicle.com

You want to make sure all the staff make it home safe, the inmates are all alive and accounted for in their cells and all required activities, like visiting, sick-call and yard are completed. The inmates don’t want movement or activities curtailed by lockdown due to the actions of one out of control inmate.

Soon after the stabbing, you’ll start to get information that the stabbing was a PC, or Protective Custody move to get off the yard to avoid a drug debt. Or, the victim disrespected a shot caller, by not paying rent. Or disrespected gang leaders when he refused to mule something from his work assignment back to the house. The victim may have crossed racial lines and committed some affront against the other racial group (theft, pressured for sex, assault). The disrespect could lead to outright race war if left unchecked. The gang may order a hit on one of their own to even the respect scales.

Respect is currency on the inside. A place where every action and slight are magnified, respect can get you killed. The prison gangs are particularly effective at using respect as a tool for keeping their members in line. The Aryan Brotherhood expects all the white inmates to fall in line. The Northern Structure is quick to discipline its ranks when disrespect occurs. Gangs reign in their members if someone gets out of hand and could cause more attention from prison staff.

1 Building C Side
Courtesy of the Folsom Prison Museum

While working in a SHU unit, I was on the tier to give an inmate notice that he had a hearing coming up. I slipped a copy of a 114-D through the food port. It was a standard document that explained what the hearing was about and how his stay in SHU was probably going to be extended because of his affiliation with the Mexican Mafia. Let’s say, he did not take this news well. He called me every sack of MF’ers in the book and some Spanish swear words I never heard before. It was a creative and colorful display.

When his tirade was over, I finished my business on the tier and on the way out, the Mexican Mafia leader tapped on the cell door. I went to see what he wanted and all he said was, “I’ll take care of that.”

The next day on the tier, the lower level Mexican Mafia associate stood at his cell door, eyes blackened and bruised. He’d told medical staff the night before that he’d fallen out of his bunk. He never said another word to me in the year he remained in that housing unit.

← Where Have All The Convicts Gone?
You Know You’re Old When… →