Airline Travel Is The Final Frontier

To boldly go where everybody and their hillbilly uncle are going today.

That captures the essence of air travel for me, as of late. Gone are the days when a family vacation meant getting out of bed at four in the morning and getting tossed in the back seat of a 1960 Studebacker station wagon, still clad in your pj’s. This was a road trip, a family vacation and you will enjoy it dammit.

Some of my earliest vacation memories are speeding down the interstate to somewhere, while Dad chain-smoked Camel cigarettes. The clouds of nicotine and tar inside transformed the corn and cotton fields outside into foggy distorted swampland. Snoop Dogg would be envious of the density of the toxic cloud in our little hot box. 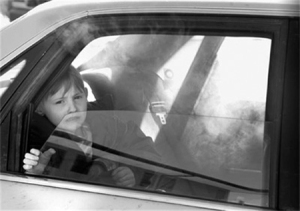 Why we had to march to the car, hours before dark, remains a mystery to me to this day. Dad said he wanted to beat the traffic. We lived in the middle of nowhere. Nowhere was technically two hours north of Bakersfield – there was no traffic coming, or going.

I knew then, there had to be a better way of travel…

Fast forward to today. Where are all the flying cars and supersonic travel they promised us? But it’s better that the old family station gagging-wagon, right?

But, we have airline travel! in the intervening years I have been stranded in airports because of earthquakes (It’s California, remember), flights grounded for dense fog (it’s California remember), and stuck on the tarmac for two hours at LAX (it’s California remember). Then there are the serpentine security lines, partial disrobing and the pat down, which I can only assume is a medical exam searching for a third testicle. Cancelled flights and changed departure gates – getting nowhere fast.

At some point air travel changed from a casual experience, one which people dressed up for and acted civil to one another. Airlines catered to their passengers. And passengers were not a surly bunch of selfish creeps.

What happened to that? Now, it feels like a cattle car with wings. You will no doubt find yourself shoulder to shoulder, next to someone who hasn’t felt the compulsion to shower in more than a week. Let’s take an example, from a recent trip from Sacramento to Phoenix. I arrived at the airport an hour and a half before my flight and spent twenty minutes playing duck, duck, goose for a parking spot. Then another ten minute jog to the ticket counter (ok, not jog. I don’t do that anymore). Twenty minutes in the baggage check in – time’s a burning, but I have plenty, if the TSA does’t get too “handsy.”

To my amazement, I’ve been listed as TSA pre-checked and I get to go to an empty lane. No dropping trousers, no turning my head to cough, just walk on through. The TSA staff were friendly and efficient. Whoa… I sent a tweet to @TSA to thank them for the service.

Now, I did choose one of those low budget airlines, so I didn’t expect luxury. But I swear the flight felt like a prisoner transport, like the scene from Con-Air, complete with passengers like this: 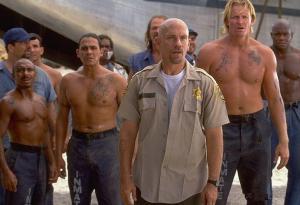 Now, I know I’m getting older and that comes with some physical changes. But, my ass did not get big enough to have to squeeze into the seat for an hour and forty-five minutes. Once in, there is no getting out.

The return trip was marked with two notable events. This first was courtesy of my son, who lives in Phoenix. Now, our family has a history of practice jokes and Sonny-boy decided that it would be hoot to slip something into my backpack carry on. He and his wife wrapped up a “gift” for me to take home and told me not to open it until we got home. That should have been a red flag.

At the airport, I tossed my backpack on the scanner and let it go on through. Nothing from TSA, not even a side-eyed glance at the contents. So, I thought nothing more of it.

Secondly, once the plane boarded and taxied out, the flight out of Phoenix was delayed because an incoming plane popped a tire upon landing. The traffic stacked up like an Los Angeles freeway. 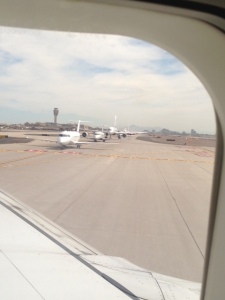 Finally in Sacramento, I opened the gift from my son and found a marble “statue” depicting a portion of male anatomy of enormous proportion. Sonny-boy hoped that the TSA would have me take the object out of the backpack in the security line. It didn’t happen, but well played Sir, well played.

I still had to get up early, stand in lines, smell hordes of the great unwashed and get set up for a public embarrassment of phallic proportion. Next time, I’m driving.

Roll up the windows!

← Get Off My Damn Island!
Five Signs That The Apocalypse Is Near →