Don’t Be A Butt

I considered not posting because, this week Kim Kardashian’s butt on the cover of Paper Magazine broke the internet. I’ll admit, I saw it – like a train wreck that you simply can’t look away from.  (you won’t find a link to her photos in this post, so you can go elsewhere for that visual)

After the bile settled in my throat, I wondered what was behind (pun intended) all this nonsense. Was it a desperate ploy for media attention? Or, was this skin flick a shrewd marketing gambit? Nothing this woman does is by chance.  Every selfie and paparazzi covered shopping spree is scripted to get attention. If you abide by the, any press is good press theory, then the woman killed it this week.

I, however, am not a fan. Sure, I get what her legions of loyal followers say; if she’s got it flaunt it, or she’s showing that she still has it after 30. But, what is “it” supposed to be?

Intelligence?  Power? Business acumen? No visible scars, marks, or tattoos?  Everybody has a butt, so? Not everyone has a photoshopped butt.  It has to be more than that, right? 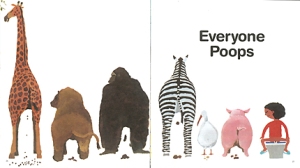 Everyone Poops by Taro Gomi

If, this whole butt-storm is a marketing strategy for the “Kardashian” brand, what exactly are they selling? According to their product website the family endorses over a million products. Not surprising among them are tanning spray, a clothing line and sunglasses.  Only the tanning spray would appear to apply (in all the nooks and crannies) in this case. Is that all this woman has to offer?

Each of us wants to put our best self out there and market what we’ve got, products services, books or doo-dads and whats-its. At some point, Kim’s assets will begin to fall and what’s left then? If someone’s total self-worth is wrapped up in a fragile photoshopped image, that is one hard fall waiting to happen.

from unofficial dragon at tumblr

I’m not saying that we (Kim included) shouldn’t put ourselves out there. I’m suggesting that you put yourself out there with substance, content and message.  Even this guy has a clear marketing message:

There is no need to be a butt about it.