Time for something a bit more lighthearted and enlightening…

Charles Darwin was a scientist of some renown and shaped the way we think of survival on this harsh planet with his epic, Origin of the Species, in 1859. 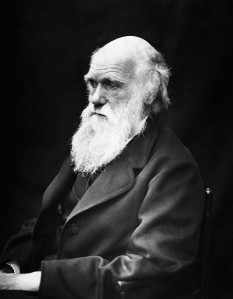 image of Darwin by andrew comings via flicker creative commons

While this monumental work got all the praise and attention, a lesser known unpublished volume was uncovered, entitled Edit or Die. It seems Darwin may have plagiarized this largely unknown text when he wrote his evolutionary tale.  At the very least, Edit or Die guided his work.

In the early days of of the written word, monks would hand scribe every letter in painstaking detail. Scribe, rinse and repeat–day after mind numbing day. Mind you, the monks probably didn’t embrace the rinse part of the equation as it was filthy and dirty time. Hence, the name Dark Ages. 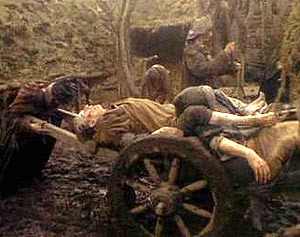 With little else to do, the monks were usually half in the bag on mead whilst scribing by candlelight. To break up the monotony a monk named Ed started taking shortcuts. At first it was a skipped brushstroke. Then a letter omitted. Soon, whenever the Friar (or whomever it was in the monk hierarchy) wasn’t leaning over Ed’s shoulder, words were left out of ye old manuscript. And no one noticed. Soon the other monks joined Brother Ed in the art of making subtle changes to the written words.

The Silent Monk Rebellion (because of the whole vow of silence thing) went unheard and unnoticed until the Friar took on the job of duplicating a hefty manuscript from a powerful, self-important Author Prince with ties to a local bloodthirsty warlord. The Author Prince demanded a dozen copies of his masterpiece in two day’s time, or the monks would be sacrificed. When the monks took stock of the work ahead they exchanged furtive glances and knew what must be done.  Do the Ed thing or die.

Motivated to avoid getting their heads lopped the monks pushed onward into a fevered pace. Ink and vellum odors wafted through the monastery. Adverbs, excess dialogue tags, and unnecessary sections were discarded. It was the only way the text could be duplicated and make the “dead” line. There were no Kinkos back in the Dark Ages.

The last copy was presented to the Friar as the Author Prince burst through the monastery doors. The warlord and his henchmen encircled the monks with their swords drawn. The Author Prince looked at the dozen small piles of inked pages in the shadow of his original towering manuscript. The disappointed Author Prince signaled for the warlord to kill the monks.

The warlord took one of the newly created manuscripts and began reading. He lowered the document and looked at the Author Prince. “This isn’t the crap you usually write.”

The Author Prince scanned a copy and noticed the changes. Tighter construction, plot points connected and most of the Middle English slang was removed from the final version. “What have you done? This isn’t what I gave you.”

“Oh yeah. I’d be willing to publish this in the town square,” the warlord said.

The Author Prince asked the Friar, “What did you do to my manuscript?”

The Friar glanced at his troublesome monk. “It’s an Ed it.”

Now you know where the term Edit originated. Edit or Die. This may have not have been exactly how the transaction took place, because the records are a bit sketchy in the Dark Ages. But Charles Darwin grabbed hold of the notion and based his entire body of research on the work on one drunken monk. 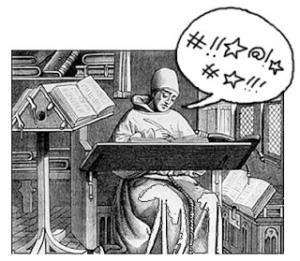 ← How Do Drugs Get Into Prison?
Killing Time (At Airports) →
Follow James L'Etoile on WordPress.com