I had a flashback to my old prison days this week. For a moment, it seemed like I was on the yard and I spotted a convict passing a knife for another con to use. Something was about to go down. 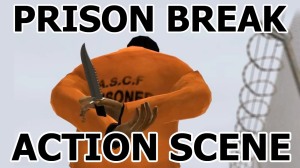 But this flashback was actually in a memory care unit for seniors.

Okay, let me explain. A few times a month, we take our therapy trained corgis to places like assisted living units, memory care and, hospice to give the residents a little bit of comfort in what could otherwise be a joyless day. It’s rewarding to see a smile from a barely conscious person when they catch a glimpse of a dog. The staff have a difficult job, one that I know I couldn’t do, keeping everyone’s spirits up and getting them to engage in whatever activity is going on in the unit.

And just like in prison, you have those few “inmates” who want to do their own thing and have no place for the rules.

I’m meeting with a group of residents, who are petting and loving on the dogs, when a woman approaches. She’s watching the staff like a convict on the look for the nearest yard cop. Then I catch the flash of metal in her hand. She has it cupped behind her back and she’s keeping her distance from the group. She’s coming my way.

Now the woman isn’t frail, she’s able to move around well, and she’s probably had her Ensure this morning. Still, I think I can take her, two out of three times, if it comes to it. Her hand whips out from behind her back and–damn–she has a knife. A table knife she’s stolen from the kitchen. I’m ready for the lunge, but it doesn’t come. Instead, she leans in and whispers, “We’re breaking out. Take this.”

I’m waiting for her band of co-conspirators to show up and stage a senior rendition of the Shawshank Redemption in the memory care unit and bust through the locked doors. No one else comes to join her prison break. It’s just me and her.

“Are we going to have a problem here? Don’t make me hurt you. We’re doing this,” she says putting the knife in my hand.

She’s also holding a fork from the kitchen. Now we’re both packing a shank for our breakout. She’s dog-eyeing the movement by the door. You can tell she’s been watching staff movement in and out and knows when to time her escape attempt.

“Why don’t you let me take care of that for you?” I hold my hand out and she pauses, but eventually, she hands over her weapon. I’m able to disarm her, but she’s still watching the door. I make eye contact with one of the staff and they wander over. I hold the knife and fork behind my back, so that the staff member sees them.

Now, in prison there would have been a cloud of pepper spray, maybe a warning shot whizzing overhead, and reports to write. Our convict handed over four toothbrushes, a pair of domino tiles, hair brushes and a few other items pilfered from other residents’ rooms. She was ready for whatever came her way during her prison break. 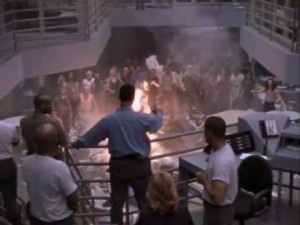