Depending on the definition used, a serial killer is one who murders two or more victims, in separate instances (FBI Serial Murder Symposium – 2005). Theodore “Ted” Kaczynksi meets this standard as a serial killer in the classic sense–three victims were killed during his sixteen bomb, seventeen-year long domestic terror campaign as the Unabomber.

One fact lost in the extensive search for Kaczynski is that two of his three murders took place in Sacramento, making him one of Sacramento’s notorious serial killers. 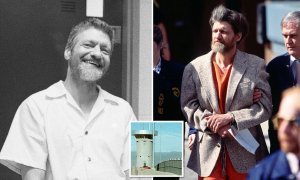 On December 12, 1985, the owner of Rentech Computer Rentals, Hugh Scrutton, age 38, left his store through the back entrance into the parking lot. Outside the door, Scrutton bent to move a scrap of lumber that appeared to have been discarded in the doorway.

The wooden debris was actually an explosive device and it detonated when Scrutton bent over to retrieve the object. The force of the explosion sent hundreds of shards of wood shrapnel and nails into his chest and tossed the store owner ten feet away. He cried out for help and survived for nearly thirty minutes before succumbing to his wounds at the University Medical Center.

This was the first fatal bomb attack attributed to the Unabomber, who had previously focused his attention on universities and airlines. Kaczynski, who would later be found hiding in his Montana cabin wrote about the attack on Scrutton:

“Experiment 97. Dec. 11, 1985. I planted a bomb disguised to look like a scrap of lumber behind Rentech Computer Store in Sacramento. According to the San Francisco Examiner, Dec. 20, the “operator” (owner? manager?) of the store was killed, “blown to bits, on Dec. 12. Excellent. Humane way to eliminate somebody. He probably never felt a thing. 25,000 reward offered. Rather flattering.”

The FBI had established the UnABomb task force in 1978 after a bomb was found in the cargo hold of an American Airlines flight out of Chicago. A faulty timer prevented the bomb from going off. There was enough explosive in the device to completely destroy the aircraft. UnABomb stood for University and Airline Bomber. The task force found that the bomb used in the RenTech attack was similar to those used in airline and university bombings, particularly the use of handcrafted wooden components. Shortly after his Sacramento bombing, Kaczynski began mailing letters to newspapers and former victims, with densely worded diatribes about the impact of technology on society and the environment.

The spree of bombings aimed at colleges, scientists, and computer engineers continued with evidence found on the bomb parts linking them to a group calling themselves “FC” or the Freedom Club. In December 1994, another fatal attack occurred in New Jersey. Advertising executive Thomas Mosser was killed when a package addressed to him exploded. Mosser was believed to have been targeted because he played a role in assisting Exxon clean up its image after the Exxon Valdez oil tanker incident.

The Unabomber went quiet until the morning hours of April 24, 1995 in Sacramento. Employees of the Timber Association of California sorted the mail and found a package addressed to William Dennison, an executive of the association who had retired a year earlier. Dennison was a vocal proponent of the logging industry and a central figure in what was referred to as the “Timber Wars” which pitted ranchers and loggers against environmentalists. Gilbert Murray replaced Dennison as the chief executive officer and was said to have calmed the rhetoric on both sides of the logging debate. The package was the size of a shoebox and wrapped in brown paper. 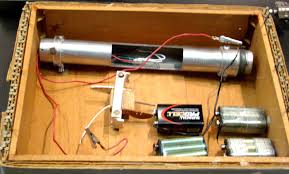 Murray picked up the package from the mailroom and told some of his coworkers that he’d forward it on to Dennison if it was important. He got as far as the lobby when he must have torn open the paper, triggering the explosive. It killed the father of three instantly and blew the windows out of the brick building. Five other association employees were there at the time and Murray was the only casualty.

FBI investigators immediately tied this attack to the Unabomber from the preliminary assessment of the bomb-making materials. Letters from the Freedom Club continued and threatened continued attack unless his fifty-page manifesto was printed verbatim by a major newspaper or magazine. In exchange, the Freedom Club offered to end the bombing campaign. Frustrated at the lack of progress in the investigation, FBI Director Louis Freeh and Attorney General Janet Reno recommended publication of the manifesto out of concern for public safety. It was also hoped that a reader could help identify the persons responsible once the manifesto become public.

Bob Guccoine of  Penthouse magazine volunteered to publish the piece, and the Freedom Club responded that because Penthouse was “less respectable” than outer publications, they would “reserve the right to plant one–and only one more bomb after the publication. On September 19, 1995, the New York Times and the Washington Post published the full text of the manifesto, entitled Industrial Society and Its Future.

The FBI’s Behavioral Sciences Unit developed a psychological profile of the unidentified bomber as a man with above-average intelligence, a neo-luddite, with connections to academia. The profile was discarded in 1983 when analysts focused on the bomb maker’s physical evidence believed they were looking for a blue-collar airplane mechanic. Link here for another post about faulty profiles The FBI received a thousand calls a month after the publication of the manifesto and a $1 million dollar reward was issued for information leading to the Unabomber’s capture.

In 1996 attorney Tony Biscegli, on behalf of David Kaczynski, contacted FBI profiler Clinton Van Zandt. David provided copies of letters and a 1971 easy written by his brother, Ted. He was concerned about his brother’s behavior and continued isolation. The FBI compared these new documents against the manifesto and determined that there was a 60 percent chance that they were written by the same individual. Although David Kaczynski tried to remain anonymous, CBS News was ready to leak his identity, but the FBI asked for 24 hours.

Scrambling to pull together a warrant, on April 3, 1996, the FBI executed descended upon a remote mountain cabin in Lincoln, Montana. A dirty and disheveled Ted Kaczynski was arrested at the cabin which contained a treasure trove of bomb components, a live bomb ready for mailing, and an original typed manuscript of his manifesto. There was so much evidence in the small cabin that the FBI moved the entire structure to a secure storage facility for processing. 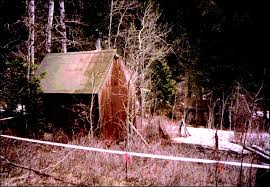 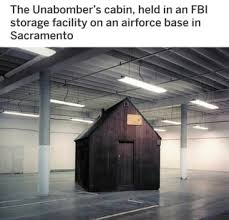 Later that month, Ted Kaczynski was indicted on ten counts of illegally transporting, mailing and using explosive devices, and the murders of Scrutton, Mosser, and Murray. While in custody in the Sacramento County Jail, Kaczynski attempted suicide. On January 22, 1998, Kaczynski avoided the death penalty and plead guilty to all charges. 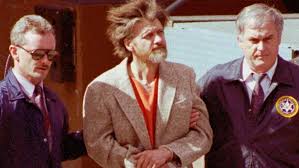 While he later tried to withdraw the plea and appealed that his manifesto couldn’t be used against him because it violated his freedom of expression. All appeals were exhausted and Kaczynski is serving life without the possibility of parole in the supermax Administrative Maximum Facility near Florence, Colorado. 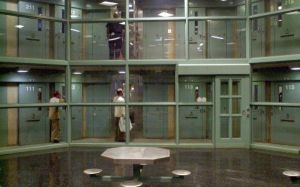 One of Sacramento’s most notorious and often overlooked serial killers.If you’d like to hear more about Sacramento’s connection with serial killers, crime and why I write about them, check out the Prison to the Page Newsletter. It’s free and I won’t clog up your inbox with spam.