Snakes On A Plane – Or In Your House

I had a paranormal experience this week.

I channeled Samuel L.  Jackson from his infamous role in Snakes On A Plane.  There shouldn’t be snakes on a plane and there shouldn’t be snakes in my house.  First off, no this wasn’t a venomous rattlesnake, the variety that slither about in the foothills where we live.  And, no, it wasn’t a fugitive anaconda from a local exotic reptile center.  But, still there was a snake, in my house.  In. My. House!

The trespassing serpent found a comfortable little spot underneath a grandfather clock until the chimes sounded at eight o’clock.  The bong, vibration, or snake repellant charm of the clock itself, sent the creature slithering out from its comfy, hidden lair.

The first to spot the intruder was our twelve month old Pembroke Corgi, Emma.  Now, normally, Emma doesn’t bark much. She leaves that two her two-and-a-half year old Corgi brother, Tanner.  Something drew Emma to the clock, she sniffed around for a couple of seconds, then started barking.  The tone of her bark was more insistent, and usually, when she “acts out,” Tanner goes and checks out what kind of trouble she’s gotten herself into.  Tanner, walked over and instead of “correcting” the younger pup, he turned, went in the opposite direction and jumped up on a corner of the sofa. 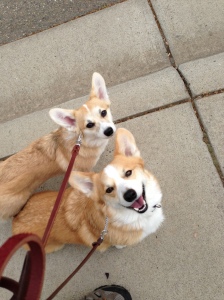 Emma, kept circling and barking at the base of the clock, so Ann-Marie and I go see if she lost a toy underneath.  I shine a flashlight and don’t see anything but a dried leaf and fluffy balls of Corgi hair (note to self – time to vacuum under the clock).

Ann-Marie reached under and snagged the leaf, showed it to Emma and the dog wouldn’t let it go.  She’s all amped up, like she found a vial of Corgi-crack, still pacing, circling and barking.

Slithering, against the baseboard next to the clock – SNAKE!

Okay, this was a little snake, a baby garter snake.  But it wasn’t supposed to be here.  So, after the initial shock, (shiver)

I snake wrangled the critter into a paper towel (Hell no, I wasn’t going to touch it), carried the little guy out and liberated him in the  front yard.

Magically, Emma stopped barking.  She sniffed to make certain the creature was gone, then went about her Corgi duties – napping.  Tanner didn’t move off the sofa, just to be safe.

About six months ago we ran both dogs through a Rattlesnake Avoidance Training Clinic because we live in an area Rattlesnakes claim as their natural habitat.  Dozens of dogs are bitten each year in the neighborhood and this spring, we found a rattlesnake in our backyard. 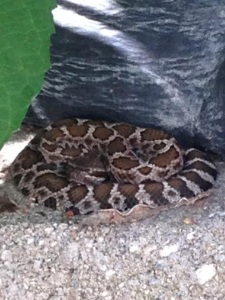 Rattlesnake in the backyard

The training teaches the dog to recognize the sight, smell and sound the rattlesnakes give off and teaches them to avoid that slithery thing.  Tanner, must have remembered his training and ran to the safe spot on the sofa.  He wanted nothing to do with that damn thing.  Emma, knew something was wrong and alerted us to the snake’s presence.  Not a rattlesnake, but still it was something that didn’t belong in the house.

I’m happy to report the house is a reptile free zone.  But they’re out there- waiting.