Who doesn’t have issues?

We all got ’em. Take a good look in that mirror and if you’re human you’ve got your share (some more than others) of quirks, habits and flaws. Collectively, these are your “issues.” They aren’t all bad, don’t get me wrong. That mix of psychic stuff is what makes you – you. Some of us keep these characteristics hidden like a dark family secret, while others let their freak flag fly, with gusto.

Writers, in my experience, tend to have more than a full share of issues. I’ve heard it said that you could replace the signs at a writer’s conference with those from an asylum and no one would notice the difference. The bunch of “patients” or “creative-types” in that room exhibit behaviors and personality tics in a higher order than the general public.

Within the padded walls of a writer’s conference, or in the solitary confines of an author’s office, there are outbursts that would make a Tourette’s sufferer blush. Passive-Aggressive, attention seeking, crippling self-doubt, hopelessness, depression, fear of rejection, envy, and sleep deprivation are the basic building blocks of writing. You are also talking to imaginary characters (Don’t pretend you’re not). If you aren’t experiencing these symptoms, you ain’t working hard enough. The key to your survival and sanity is not banishing the “illness,” but in managing your symptoms.

What if you harness all that fear and loathing in writing (thank you Hunter S. Thompson) and finish that Y. A. zombie erotica you have titled as 50 Shades of the Undead. Purge the fear of failure and rejection and use it as motivation to instill that same quality of fear into the pages of a horror short you’ve put off.  Fear is fear, right? It doesn’t matter if it’s fear of the dark, fear of open spaces, or fear of spiders. It all feels the same. Fear, heart pounding, chest constricting, frozen in panic, fear. How do you harness these dark powers? Control them?.

Writers are ultimate control freaks. Think about that for a moment, who else will create an entire world, populate it with rich, deep characters, for the sole purpose of watching it burn? Chances are you’ve come up with a likable character only to kill him or her off. And that character may have borne some likeness to a particular character in your real life. (Don’t look at me sidewise like that. You know exactly what I’m talking about).

It’s called “leaky borders,” a psychological term where the barrier between the subconscious mind and the conscious are a bit porous. Ideas, fears and issues seep into the conscious mind and may end up on the page. It’s a healthy thing, for me anyway. I’d rather throttle some shifty character in a story than do something that would get me an ill fitting straight jacket in real life. That’s the control part. When you exercise just a hint of control you can let your freak flag fly and not end up yelling at a bag of cilantro in the farmer’s market.

Without some leaky borders, you’ll blow a mental gasket and your writing will have all the emotional tug of a 1986 Toyota transmission repair manual.  It doesn’t have to be only the negative stuff. Love, joy, gratitude and discovery are powerful too, if you let them across the border. 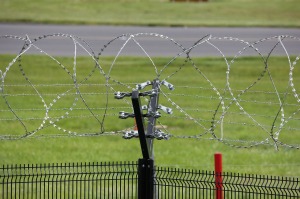 How leaky are your borders?

So, the next time someone tells you that you have issues, smile and thank them (after taking mental notes for an appropriate literary disposition of their remains).

← Let Me Enjoy My Happy Place
Is Your Bucket Full? →
Follow James L'Etoile on WordPress.com