You see expressions of outrage everywhere. It’s on social media, television, and you can find it in your neighborhood. We seem to be outraged about something, all the time. Therein lies the problem. We’ve cheapened outrage by overuse. 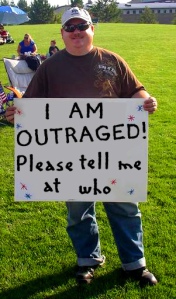 An Outrager
image by monkey bob99x via flickr creative commons

Not all outrage is created equal. There is righteous indignation and then there is the self-possessed cry for attention, both publicly packaged up as angry, loud expressions of injustice. The outrage when a kid kills another kid should not carry the same weight as a the outrage sounded when a hacker exposes Ashley Madison “hook-up” clients. The news media would have you think they are equally responsible for ripping apart our threadbare social fabric.

Decades of increasing political correctness and participation trophies has made us hypersensitive to every single encounter with another person. When I come out on the short end of an interaction with someone, that doesn’t mean I’m entitled to protest and scream outrage. When the newest Apple iPhones sell out and I can’t get one – that does not qualify as outrage. Arrests for lawless behavior should not be explained away under a banner of outrage. A red Christmas Starbucks coffee cup doesn’t, in my little corner of the world, qualify for outrage. Yet, the Internet blew up over the color of a paper cup.

The red outrage cups via Starbucks.com

You were mean to me – outrage. You didn’t include me – outrage. You made me uncomfortable – outrage. You called me a name – outrage. Really? You dial your response all the way up to a Spinal Tap 11, to outrage. What happened to mildly pissed-off, disappointed and upset? This all or nothing response, where everything’s as outrage, is counterproductive.

We have a willingness to dial it all the way up.

People say stupid things. Stupid people say ignorant things. Sometimes it’s intentional, something said to demean, insult and disparage. It’s not right, but no amount of outrage can fix stupid. Like the old line, “Don’t teach a pig to sing, because it wastes your time and annoys the pig.” Outrage is like shooting the pig because it didn’t sing the right words.

Words have become targets of outrage. They’ve become too “painful” or “insensitive” to us. Frankly, the wrong words are being labeled as outrageous and unspeakable. The words “metastatic,” “stage IV,” “Alzheimer’s” and others of their ilk are outrageous and cause more pain and suffering than someone’s bigoted take on my race.

Where Syrian refugees live shouldn’t be a source of outrage. Concern? Sure. Worry? Perhaps. The outrage is that there are 9 million Syrians who have been forced to flee their homes.

For me, I guess I’m saying that we seem eager to express our outrage when it seems like we should actually do something about the underlying condition. Outrage isn’t helpful, it’s easy and a bit lazy. Dialogue and willingness to make positive change is hard. It has to start somewhere, so I’m dialing back my outrage and saving it for issues bigger than a red paper cup.

← A Message from the Great Beyond
How It All Began… →